The Hitchhiker’s Guide to the Galaxy was originally written as a radio script, broadcast on BBC Radio 4 in 1978 in 6 episodes described as fits – a term used for a section of a poem that goes back to Old English. The Hitchhiker’s Guide appeared in book form in 1979; since then it has been adapted for film, stage, comic book, and computer game. The complete series originally comprised three novels: The Hitchhiker’s Guide to the Galaxy, The Restaurant at the End of the Universe (1980), and Life, The Universe and Everything (1982); the later addition of So Long, and Thanks for all the Fish (1984) and Mostly Harmless (1992) led Adams to describe the series as ‘a trilogy in five books’. 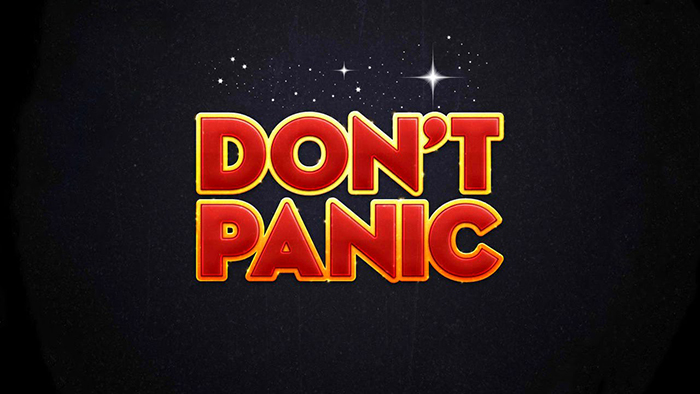 What is Towel Day?

For aficionados of Adams’s work 25 May is officially celebrated as ‘Towel Day’; it falls two weeks following his premature death in 2001. As a mark of homage to the author, fans are encouraged to carry a towel with them – a gesture inspired by the book’s claim that a towel is the ‘most massively useful thing an interstellar hitchhiker can have’. As well as its obvious practical benefits, a towel holds considerable credibility among non-hitchhikers (termed strags), on the grounds that ‘any man who can hitch the length and breadth of the galaxy, rough it, slum it, struggle against terrible odds, win through, and still knows where his towel is, is clearly a man to be reckoned with’. Because of this, a common phrase in hitchhiking slang is ‘Hey, you sass that hoopy Ford Prefect? There’s a frood who really knows where his towel is.’ (Sass: know, be aware of, meet, have sex with; hoopy: really together guy; frood: really amazingly together guy.)

Ford Prefect and his guide to the galaxy

The book opens with the destruction of planet earth by a Vogon constructor fleet clearing the way for a hyperspace bypass. Arthur Dent is saved by his friend Ford Prefect, who he discovers is not an out-of-work actor from Guildford, but a roving reporter for an intergalactic travel guide called The Hitchhiker’s Guide to the Galaxy, from a small planet somewhere in the vicinity of Betelgeuse. Ford Prefect adopted this pseudonym when he arrived on earth; the name is that of a popular model of Ford car; having mistakenly assumed that cars were the dominant life form on earth, Ford took the name so as to remain inconspicuous.

Ford never learned how to pronounce his original name, which came from an obscure and now defunct Betelgeusian dialect, extinct since the Great Collapsing Hrung Disaster wiped out his home planet. His schoolfriends nicknamed him Ix, which translates as ‘boy who is not able satisfactorily to explain what a Hrung is, nor why it should choose to collapse on Betelgeuse Seven’. Despite being marooned on earth for 15 years – he had planned to stay a week – Ford’s only revision to the Guide’s entry for the planet was to change its one-word description ‘Harmless’ to ‘Mostly Harmless’.

The answer to life, the universe, and everything

The Hitchhiker’s Guide is perhaps best-known today for supplying the answer to the ultimate question of life, the universe, and everything, which turns out to be 42. The computer responsible for this calculation was christened Deep Thought – this name was a reference to a well-known pornographic film of the early seventies called Deep Throat. Deep Thought was built to supersede other supercomputers, such as Milliard Gargantubrain and the Googleplex Star Thinker – milliard is a now largely defunct name for one thousand million (more commonly called a billion); google – like the name of the search engine – derives from googol, the term for ten to the power of a hundred.

The disappointment of the Ultimate Answer prompts a search for the Ultimate Question to make sense of it. Despite its immense sophistication, Deep Thought is unable to carry out this calculation, but offers to design a superior computer to perform the task: ‘I shall design this computer for you. And I shall name it also unto you. And it shall be called…The Earth’. What a dull name, comes the underwhelmed response. The invention of such a computer is not welcomed by all; it is met with protests by two philosophers who argue that computers should stick to counting and leave eternal verities to them: ‘Under law the Quest for Ultimate Truth is quite clearly the inalienable prerogative of your working thinkers. Any bloody machine goes and actually finds it and we’re straight out of a job’.

Another well-known invention of The Hitchhiker’s Guide is the Babelfish, a small yellow fish which, when inserted into your ear, allows you to understand any foreign language. The name of the fish is a reference to the Biblical story of the Tower of Babel recounted in the book of Genesis, in which people worked together to construct a tower to reach the heavens. To discourage such collaboration, God scattered the people across the earth and confused their languages. The word Babel is from the Hebrew Babylon, itself derived from an Akkadian word meaning ‘gate of god’; it is unrelated to babble ‘talk rapidly and incomprehensibly’, which is formed from the ‘ba’ sound typical of infant speech (the word baby has a similar origin).

Removing barriers to communication might be judged a major leap forward in the search for global peace and harmony; in fact the Babelfish is considered to have caused more and bloodier wars than anything else in the history of creation. Arthur’s first experience of the Babelfish is certainly a mixed blessing, since it enables him to understand Vogons reciting their notoriously awful poetry.

Throughout the books, Adams mixed genuine scientific terms with coinages of his own, creating a unique blend of science and pseudo-science. Ford Prefect is originally from the planet Betelgeuse, the name given to the brightest star in the constellation of Orion; its name derives from Arabic and means ‘hand of the giant’ (a reference to Orion). Other genuine references include Barnard’s Star (named after Edward Emerson Barnard, an American astronomer who discovered it in 1916), and Alpha Centauri. But while Beta Ursae Minoris is one of the stars that make up Ursa minor (‘Little bear’), Adams is the inventor of Ursa Minor Beta, described as one of the most appalling places in the universe. In the novel, when Playbeing magazine ran the headline ‘When you are tired of Ursa Minor Beta you are tired of life’ (a play on Dr Johnson’s famous claim that ‘when a man is tired of London he is tired of life’), the suicide rate quadrupled overnight.

Adams’s scientific coinages include some of the earliest uses of the cyber– prefix that has become so prevalent among recent neologisms such as cyberspace, cybersex, cyberattack, and cyberbully. Adams is cited in the Oxford English Dictionary as an early user of cyborg, to refer to a robot, and of cybercubicle. The name of Adams’s fictional Sirius Cybernetics Corporation appears in the OED entry for cybernetics, along with the company’s marketing department’s definition of robot as ‘Your Plastic Pal Who’s Fun to Be With’. This is hardly a definition of Marvin, the book’s principal cyborg character, nicknamed ‘the paranoid android’ on account of his gloomy pessimism (an unforeseen downside in the company’s development of technology with ‘genuine people personalities’, leading to neurotic lifts and irritatingly smug electric doors).

Today, android is perhaps best known as the term for an open-source operating system; its origins are in an 18th-century formation based on Latin andro– ‘man’ + oid ‘like’. The word robot is from Czech robota ‘forced labour’; it was coined by Karel ?apek in his play R.U.R.: ‘Rossum’s Universal Robots’ (1920).

The Hitchhiker’s Guide in the OED

The Hitchhiker’s Guide is cited in OED as one of the earliest uses of the word electronic book – long before the appearance of Kindles and other devices for reading e-books. The Hitchhiker’s Guide also supplies the OED’s earliest attestation of the use of page to refer to an electronic document viewed on screen – now standard in words like web page and home page. The electronic Hitchhiker’s Guide consisted of ‘about a hundred tiny flat press buttons and a screen about four inches square on which any one of a million “pages” could be summoned at a moment’s notice’. It seems self-evident to us today that the web consists of numerous hyperlinked pages, but this was hardly the case in 1979.

The Hitchhiker’s Guide to the Galaxy went on to mirror the huge commercial success of its fictional electronic namesake, which – despite its numerous wild inaccuracies and apocryphal stories – outstripped its rival, the Encyclopaedia Galactica, for two reasons: it was slightly cheaper, and had the words DON’T PANIC inscribed in large friendly letters on its cover.